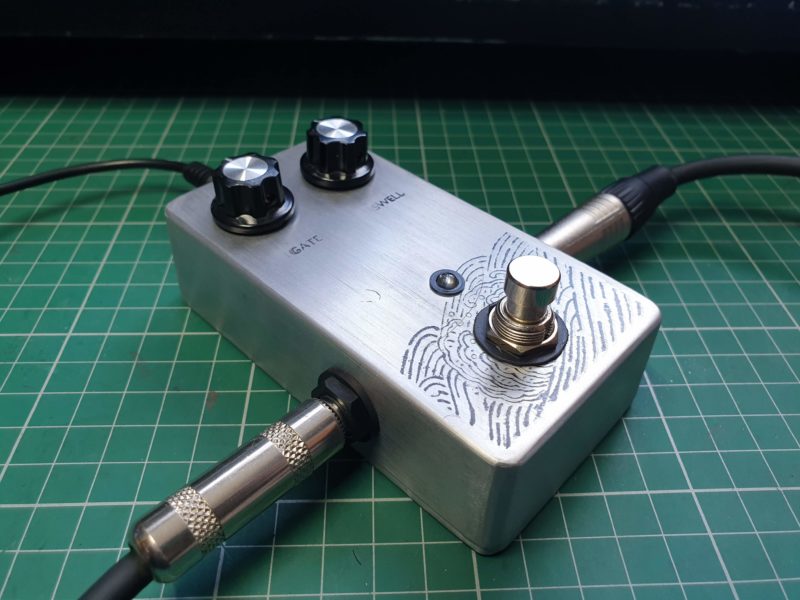 I recently finished building a clone of the Boss ‘Slow Gear’ guitar effects pedal. It took me a long time to get it working so I’m very glad to finally have it in a box.

The pedal gives a swell effect, similar to when you roll up the volume knob on your guitar as you strike the strings. It uses a noise gate to cut the sound and then automatically swells the volume up again when you strike the next note.

I followed the BYOC ‘Lazy Sprocket‘ schematic using parts I already had lying around or from eBay, and made a couple of tweaks to the circuit during testing and troubleshooting (see below).

Here’s the schematic I ended up with:

This was my first time using heat toner transfer to put graphics on the enclosure. It came out a little bit smudgy but I like it. I feel like the Japanese image of swelling waves is very fitting for a swell pedal.

As I said, I found this a tricky circuit to get working. I got guitar sound through it early on, but there was no swell effect and I eventually abandoned the build on breadboard for the best part of a year. A couple of weeks ago I decided to give it one final go before admitting defeat, and with a bit of help from the Facebook Guitar Pedal Builders group, managed to figure it out.

If you’re trying to build the same pedal, here are a few tips for troubleshooting:

The effect is pretty subtle when the Sensitivity control is high and there’s no effect when the Attack control is at zero so it’s vital that you test the pedal with about 1/4 Sensitivity and full Attack. (I actually swapped the Attack pot out for a 20K resistor while I was troubleshooting.)

The trimpot value REALLY matters for this pedal. There’s an exact point where the effect works. Even a bit one way and you just get the clean sound; a bit the other and you get no sound at all. Make sure you carefully test the full sweep of the trimpot before you do anything else!

If you’ve done the two steps above and no dice, it might be that you need to lower the value of the resistor in series with the trimpot (R13 on the Lazy Sprocket schematic). It’s listed at 10K, but on my build I needed about 9.5K total between that resistor and the trimpot. If I’d had the 10K resistor it would never have worked, but luckily for me I accidentally put a 1K resistor in series on the breadboard.

I’m not sure whether this made much difference because I did it before I figured out how important the trimpot was, but the components around T4 and T5 are clearly in parallel so I carefully matched the values of R22 and R23, C13 and C14, R24 and R25 and T4 and T5.

I experimented with a couple of tweaks to the circuit:

The schematic lists a 25K pot for the Attack control, which I didn’t have. At first I planned to use a 20K pot instead, but as I experimented I realised that the higher the Attack value, the longer the swell effect takes, and I liked the effect up to at least 30K. (When you go much beyond that, note it’s too weak by the time the swell has risen up to meet it.)

I tried putting resistors in series with the 20K pot because you don’t really notice the effect at all until about 5K, but if you do that you miss out on a bonus feature of the Slow Gear: with Attack at zero, it’s a useful noise gate.

If you only want this to be a swell effect then putting a 5-10K resistor in series with a 20K pot for Attack does the job pretty well. I was keen to preserve the extra functionality so I swapped the Attack pot for a 50K. By the top of that range, the signal after the swell is definitely too weak to be useful, but I always prefer to have more options on the dial than less so I’m happy with it.

Maybe due to other tweaks I made to get the pedal working, I found that the sweep of the Sensitivity control was too wide. For much of the turn the gate was too sensitive to ever close, so I never got the swell effect. I experimented with values for resistors each side of the pot until at maximum sensitivity the noise gate was still eventually closing. I found that a 100K resistor before pin 1 and 2K from pin 3 to ground was exactly what I wanted.

With hindsight, maybe some precise tweaking of the trimpot would have got things working with the original values, but when I tried to change things on my breadboard version it moved further away from what I wanted so I just locked in what I had.

One quirk is that turning the Sensitivity control clockwise lowers the noise gate, so reduces the effect. Normally I prefer a control to have more effect as you turn clockwise. I could have switched the A100K for a C100K reverse log to make it work ‘correctly’, but I don’t have any reverse log pots and I just wanted to get the pedal finished. I might still swap that sometime.

Here are some eBay affiliate links to sellers from whom I bought parts for this project: