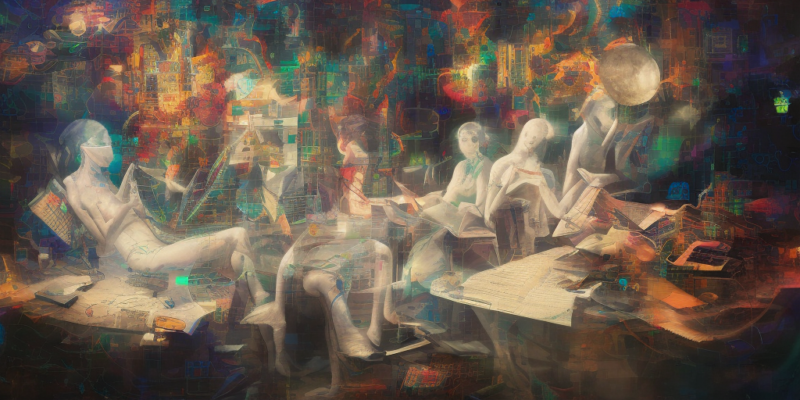 I’ve seen a number of examples of hymn texts generated by the ChatGPT AI over the past few weeks. Although the premise has usually been absurd (e.g. ducks), I’ve been struck by how strong the AI-generated texts are in terms of consistency of language and theme. Often stronger in those respects than many human songwriters’ first drafts.

I thought I should rouse myself out of my blogging slumber to make this observation out loud. And then I realised I could get ChatGPT to do it for me instead.

I prompted the AI with: “Write a blog post claiming that ChatGPT writes hymn texts as well or better than most human writers’ first drafts in terms of consistency of language and theme.”

I’ve pasted the response below.

I think the AI significantly overestimates the quality of it’s poetic structure (I haven’t been able to get it to stick to a metre yet, although perhaps that’s my inexpert inputs), but the point about thematic consistency is sound. And, with some lingering reservations, I basically agree with the conclusion.

Which leaves me pondering the processes that set the reference pitches.

What a strange future is opening up!

In recent years, there has been a significant increase in the use of artificial intelligence (AI) in various fields, including language generation. One such AI language model is ChatGPT, developed by OpenAI, which has the ability to generate human-like text based on the prompts given to it. In this blog post, we will explore the capabilities of ChatGPT in terms of writing hymn texts and compare its output to that of human writers.

Hymn writing is a form of poetry that is typically set to music and used in religious or spiritual settings. The language and themes of hymns are often deeply meaningful and personal, making them a challenging genre to write.

When it comes to consistency of language, ChatGPT performs exceptionally well. It is able to generate text that is coherent, grammatically correct, and flows naturally. This is particularly impressive when compared to the first drafts of human writers, which often contain errors and inconsistencies.

For example, when given the prompt “Write a hymn about the love of God,” ChatGPT generated the following text:

“Oh, the love of God, how rich and pure!
It flows like a river, never-ending and sure.
It fills our hearts and souls with peace,
As we rest in His love that will never cease.

The love of God is greater than we know,
It reaches to the heights and depths below.
It surrounds us with its boundless grace,
As we seek His face in every place.

Oh, the love of God, it sets us free,
From the chains of sin and captivity.
It lifts us up and gives us wings to fly,
As we soar with joy to the highest sky.

The love of God is a treasure rare,
It’s a light that guides us through life’s darkest despair.
It’s a shelter in the midst of the storm,
A comfort that keeps us warm.

So let us praise the Lord with all our might,
For His love is a gift beyond measure and sight.
It’s a love that never fades or dies,
A love that will last for all of time.”

As we can see, the language in this hymn is consistent and flows smoothly. The structure and rhyme scheme are well-crafted, making the text easy to read and comprehend.

In addition to consistency of language, ChatGPT also excels in terms of consistency of theme. It is able to generate text that stays true to the prompt and maintains a clear focus on the topic at hand.

For example, when given the prompt “Write a hymn about the glory of creation,” ChatGPT generated the following text:

“The glory of creation, it surrounds us all,
A tapestry of beauty that never seems to fall.
From the mountains tall to the oceans deep,
The wonders of the world we’ll always keep.

The glory of creation, it speaks to us of love,
A love so great and boundless, from the heavens above.
From the smallest flower to the grandest tree,
We see the hand of God in all that we see.

The glory of creation, it fills our hearts with joy,
A joy that can’t be measured, a joy that’s never destroyed.
From the laughter of children to the song of the birds,
We find delight in all the world’s sweet words.

So let us give thanks for the glory of creation,
A gift from God above, a miracle of His great love.
Let us marvel at the beauty that surrounds us,
And give praise to the One who made it all just for us.

The glory of creation is a testament to His might,
A display of His power, a reflection of His light.
It calls us to worship, to bow down and adore,
To give Him all the honor and glory forevermore.

So let us raise our voices in praise and adoration,
For the glory of creation and the One who made it all.
Let us bask in His presence, His love and His grace,
As we sing of the wonders of His holy place.”

As we can see, the theme of the glory of creation is consistently present throughout the hymn. The language and imagery used support and reinforce this theme, making for a cohesive and compelling text.

In conclusion, ChatGPT demonstrates impressive capabilities in terms of writing hymn texts. Its output is consistently well-written, with a strong focus on language and theme. While it is not meant to replace human writers, ChatGPT can serve as a useful tool for generating first drafts or for inspiration when writing hymns.

Friends from the KCD worship team joined me for this multilingual lockdown version of my song We Will Trust in God Our Saviour. I’m very grateful for this community! 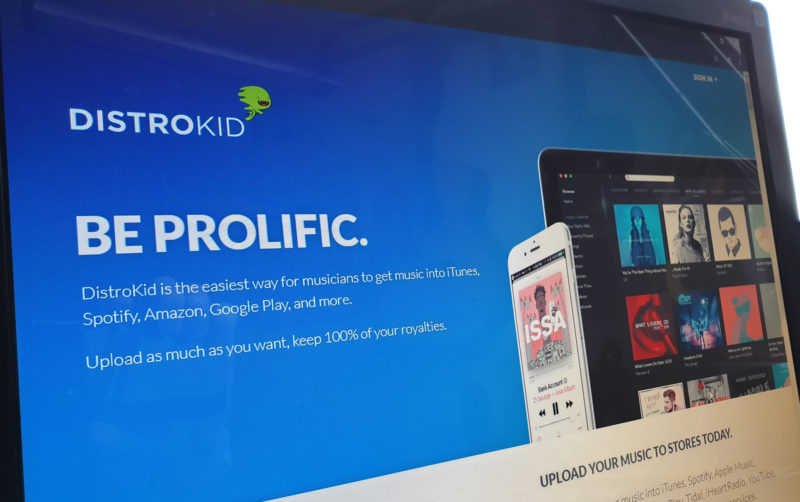 One of my priorities when I started releasing music was getting it on Spotify and iTunes. I did a fair amount of research looking into the different options and concluded that DistroKid is the best option by far.

DistroKid costs $19.99/year for a single artist account, which allows you to publish as much music as you want to basically every platform, and you get all the royalties. That’s a pretty great deal when compared with the per album upfront fees and percentage of royalties charged by other companies.

DistroKid also offers a number of genuinely useful unique features, like automatic access to Spotify for Artists and the ability to upload lyrics to iTunes. Most new features are applied to all accounts for free.

You get paid in dollars and you need a PayPal account, but it’s straightforward to withdraw earnings. The stats and reports are very clear.

Why should you consider anything else?

I can think of three main reasons why you might be better off going with another company:

I would be recommending DistroKid anyway, but if you sign up via this link, you get 7% off and I get $5.

My song ‘We Come to Hear Your Word‘ appeared on the BBC Radio 4 programme ‘Sunday Worship’ this morning. The episode was from London School of Theology. The always-amazing Geraldine Latty and Carey Luce were leading with the LST choir.

It was a great service overall, and I really enjoyed the arrangement of my song. They took it faster than the ‘Songs for Sundays‘ version and gave it great atmospheric drive. That’s a bit more like how I lead the song at Kings, although with some added Gospel verve.

If you’re able to access BBC iPlayer, you can listen to the service online for a month. ‘We Come to Hear Your Word’ comes in at 17:25 on the recording.

I had the honour of joining Joel on the Resound Worship Songwriting Podcast this month. In the regular ‘Dissect a Classic’ slot we critique the song ‘There is a Redeemer’, and then we trade reflections on our experiences at the Calvin Worship Symposium last month.

Resound Worship have released a full version of my song Worship the Lord (Psalm 100) today.

I’ve been using this one at Kings since mid-2016, but it’s taken a while to get the arrangement right and then we were all focussed on the ‘Songs for Sundays’ album.

I really like the new arrangement. It’s a little slower than I usually lead it but that gives it a greater sense of majesty. I’ll probably try it this way.

As always, Resound have produced loads of resources for the song. You can get hold of the piano score, instrument parts, backing track, audio file, lyric video and more here.

Many thanks to Joel Payne for all his work on it, and to Andy Clark for the lead vocal.

Here are the songs I finished and recorded in 2017:

I was working on this version of Psalm 134 as the year started. I really love how the recording turned out. I finally released it as part of the King’s Church Durham Psalms Project in November.

2. We Come To Hear Your Word

At the start of the year Joel at Resound Worship invited us to write for what became the ‘Songs for Sundays’ album. I knew I wanted to write something engaging with the Word and this song came together over a series of Monday mornings through January and February.

3. We Believe In One God (Unshakeable)

Also for ‘Songs for Sundays’. I had the Nicene Creed on my wall and decided to give it a go. Lots of input from the Resound team later, and I’m really pleased with how it shaped up.

My colleague Fay asked me to write a theme for the KCD Holiday Club. Inspiration finally struck a few days before the event started. I’ve had lots of complaints about how catchy it is, so apologies if it now gets stuck in your head all Christmas.

My first Christmas song! Once again, Fay asked me if I could write something for our all-age Carol Service. Once again, something came together the week before.

That’s the most songs I’ve ever finished in a year, and there are actually four more coming into land. The thread seems to be that I get songs finished if someone else asks me to write them. Do feel free to put in your requests and hopefully 2018 will be just as productive!